GFII, understanding the importance of informing the public of the advantages of the distillery effluent as liquid fertilizer, planned to do and extensive information and education campaign (IEC) in all reas where it has operations. This includes areas where there are sugarcane farms. Included in the IEC is the advocacy to educate the public that the effluent is a bio-fertilizer, contrary to public knowledge that it is toxic. The IEC, includes a communication plan to spread to all stakeholders the advantages of the liquid fertilizer, its benefits specially along the line of recycling, and a balance of industrialization and the preservation of the environment. The company to effectively communicate the IEC, invited a notable speaker, and an authority on research and recycling, and the team leader of the BIOTECH, University of Los Banos, Laguna, who made an extensive research then of the advantages of distillery effluent from around the country. The series of Symposia, five (5) to be exact, were made by way of dividing all areas into five clusters, this is to better facilitate and to bring closer to the community the IEC, and also to make it very accessible to invited participants. Clusters were as follows: 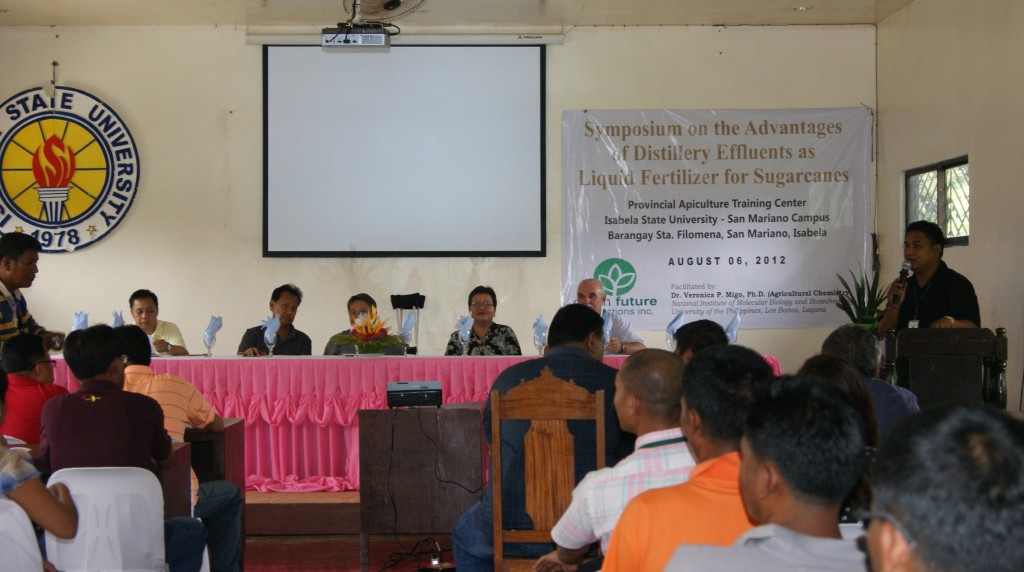 Cluster 2: Gamu, Reina Mercedes and City of Ilagan for the morning session of October 16 08:00am at Piazza Cicarelli, Gamu. 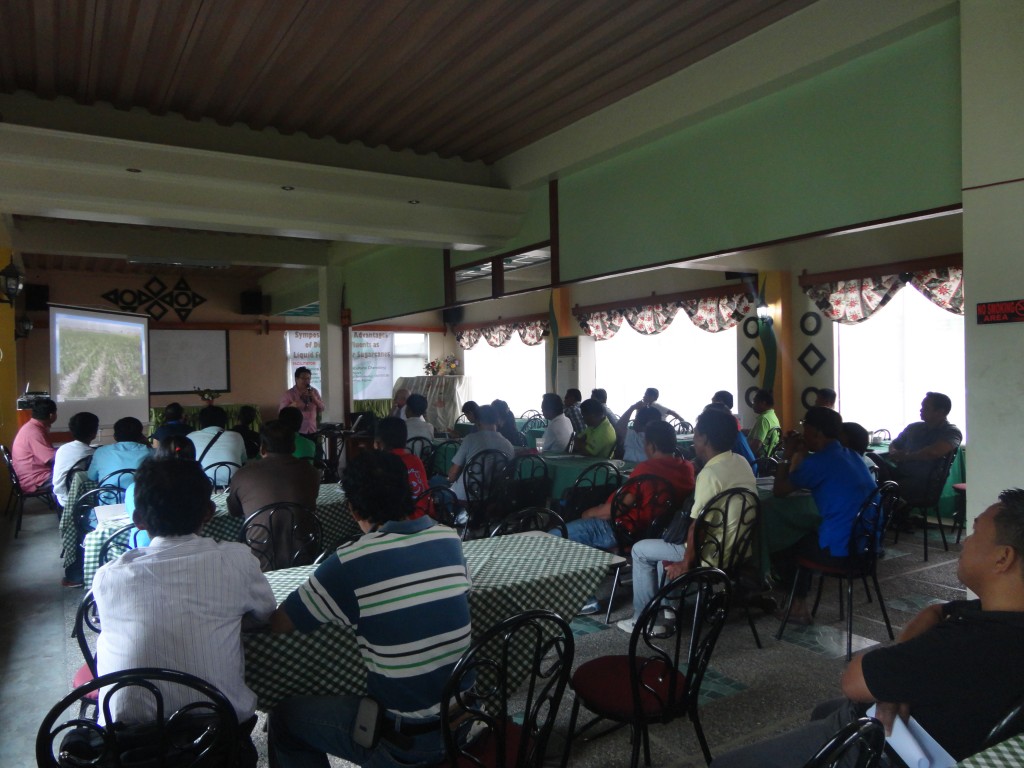 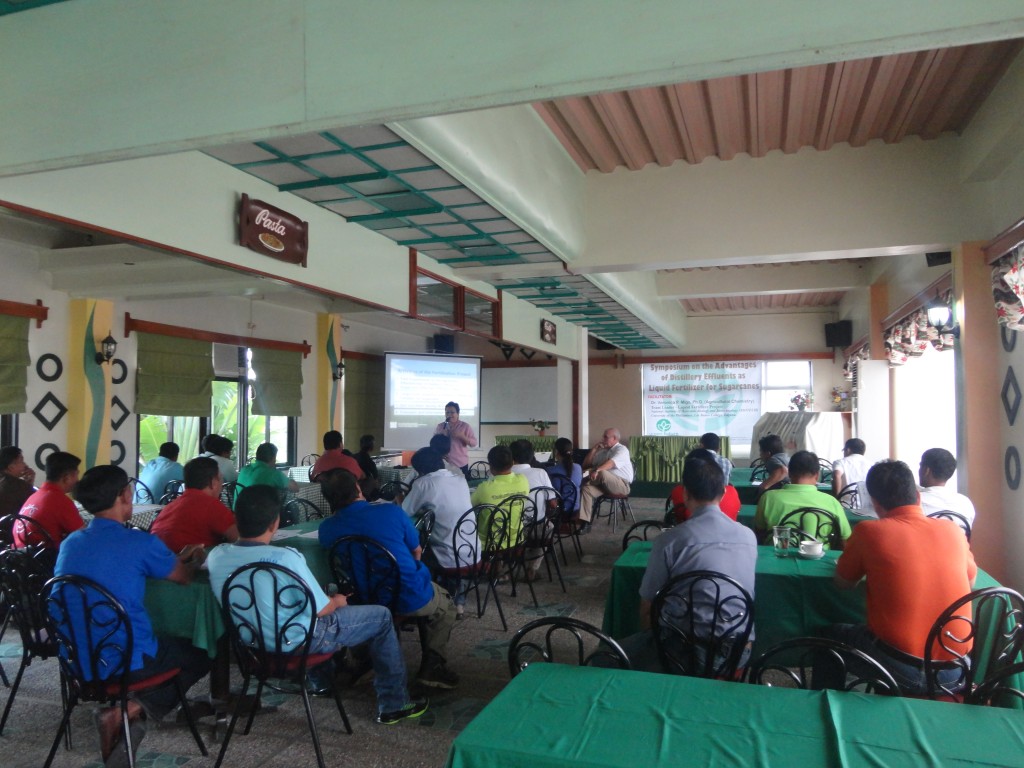 Cluster 3: Luna, Echague, Angadanan and Cauayan City for the afternoon session of October 16 01:00pm at the Isabela Hotel and  Resort, Cauayan City, Isabela.

Cluster 4: Mallig, Roxas, Quezon, Burgos and Quirino for the morning session of October 30 08:00am at The Bethany Garden Hotel, Roxas , Isabela. 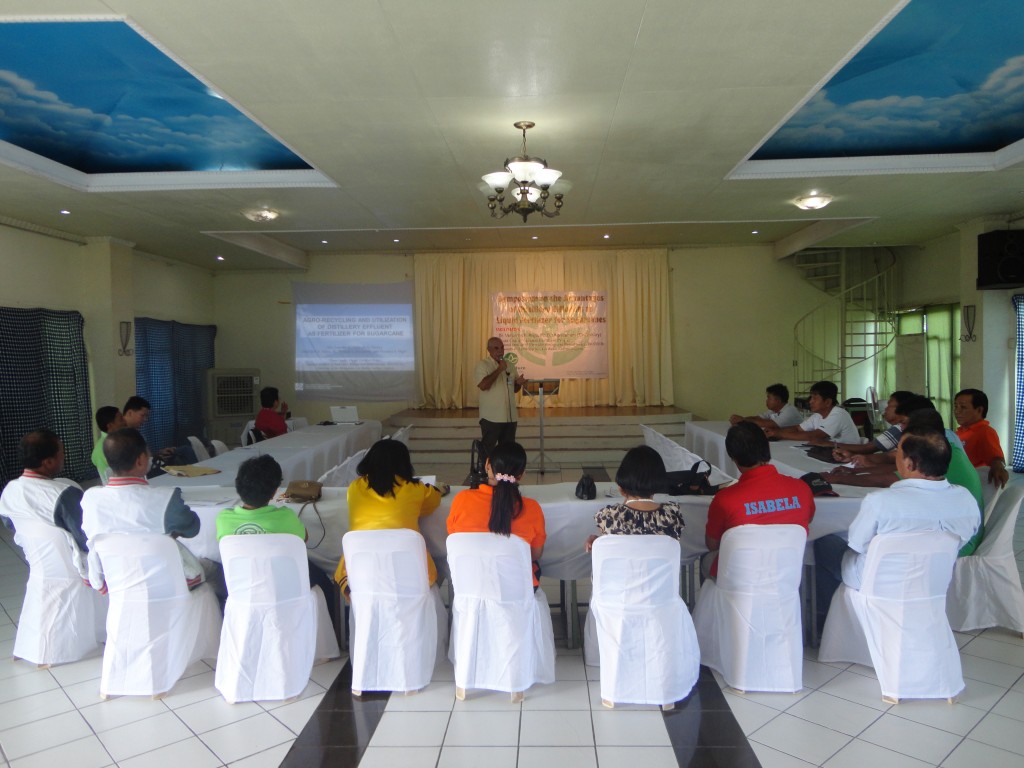 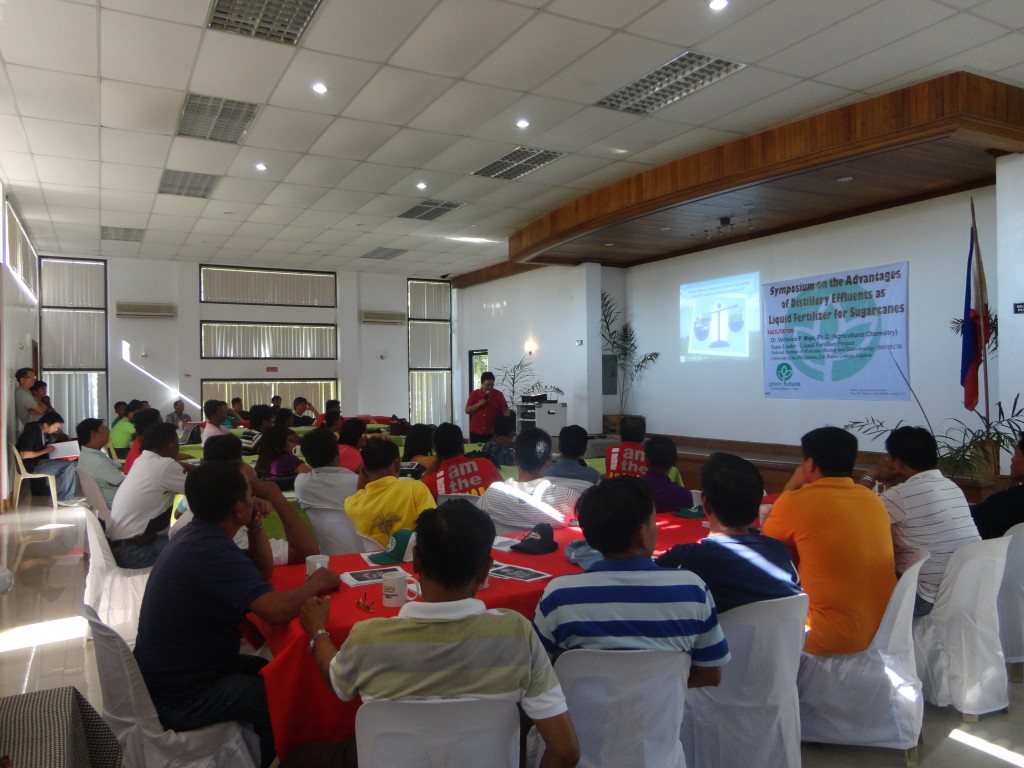 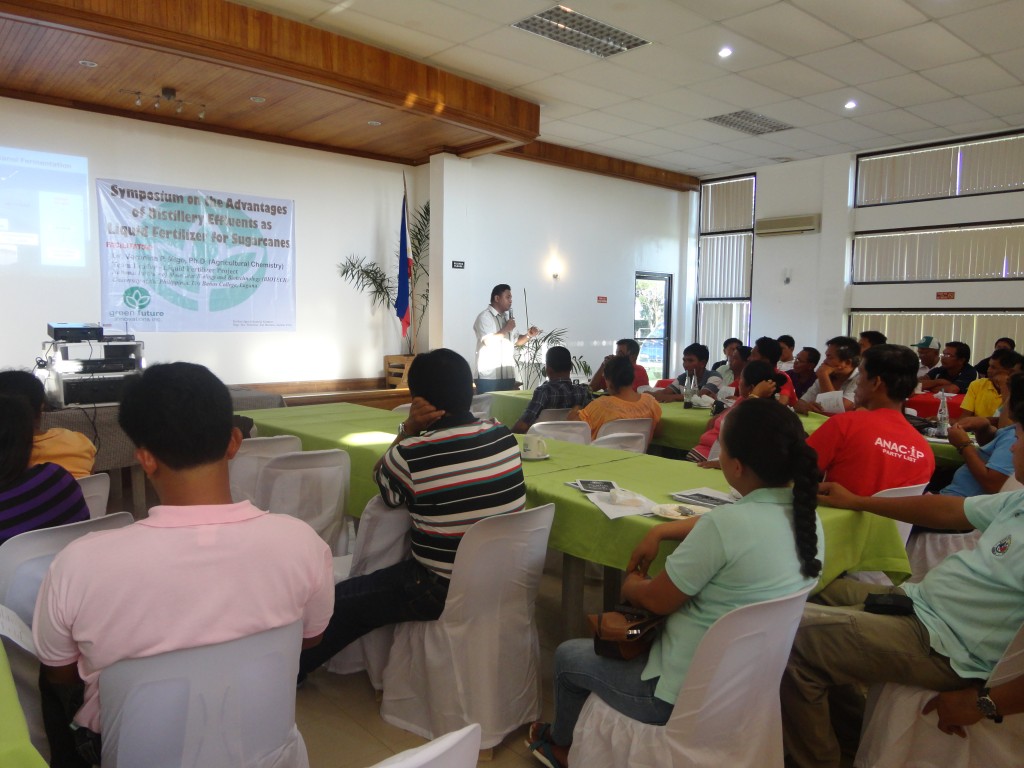 Members of the Local Chief Executives (LCE) – Mayors, Vice-Mayors and SBs of the these municipalities were invited to the symposia including respective Barangay Captains of which Ecofuel has areas of operations in order to discuss the advantages of effluents coming from industrial plants as good source of organic liquid fertilizer for existing sugarcane plantations as well as for corn crops and other vegetables grown in any household backyard.

The head of the Institute of Molecular Biology and Biotechnology (BIOTECH), from the University of the Philippines, Los banos, in the name of Dr.Veronica P. Migo was invited to facilitate the said activity.

Also, the symposium will serve as an eye – opener for wrong community speculations and rumors that effluents are toxic and are believed to be harmful to one’s health especially to those who happened to inhale the reported “foul” odor of said effluents.

This effort has been made possible by GFII – Ecofuel not just to bring the company closer to the people and the public but rather to enhance every people’s lives alongside business excellence by virtue of a healthy working relationship and open frequent communication with concerned stakeholders including communities alike.

The activity focused primarily on the discussion of the Liquid Fertilizer Project conducted by the National Institute of Molecular Biology and Biotechnology (BIOTECH) of the University of the Philippines Los Baños College, Laguna. The project was once a mere suggestion during the meeting of all Distillery Companies and concerned stakeholders called by the then DENR Secretary Ceriles.

It was discussed in the symposium the very ways of recycling distillery effluent from industrial plants and Distilleries back as a liquid fertilizer to each and very sugarcane plantations scattered all over Isabela and other nearby provinces. The research process conducted was discussed step by step in the symposium including a brief explanation on ethanol production from molasses and other by-products during fermentation.

Activities for the said project include field experiments, soil and water quality monitoring and extension and information dissemination. Presentation of Dr. Migo – the team leader for the project included lecture on scientific studies on the use of distillery slops as fertilizer for sugarcane, track of early grassroots of the research and comparison of organic and inorganic fertilizer. Part also of the symposium was the presentation of research results and outcome of the study in colorful pictures and graphs and also chemical analysis of the soil after application of said effluents.

Local officials from LGU Ilagan, LGU and DENR-CENRO Naguilian,  LGU Reina Mercedes, and members of the Press were present during the morning session. Also, the beloved Mayor of Gamu, Isabela has been represented by his wife. Meanwhile, for the afternoon session, members of the Sangguniang Bayan of Cauayan city were present during the symposium. Also, representatives from LGU San Mariano, CENRO Cauayan and City Engineering Office were able to grace the activity including several members of the press.

For the October 30 symposium, representatives from the SB Council of participating municipalities of morning and afternoon session were able to come including invited barangay captains. Dominant audience  for the afternoon session at TAPJ Resort were all the barangay captains of Delfin Albano in complete attendance. A few also were present from the municipality of Tumauini. The LGU Officials of Sto. Tomas, were not able to come due to the surge of the river, which made the overflow bridge of Sto Tomas overflowed, an effect of the strong rains for several days prior to the scheduled symposia.